The Ups and Downs

I am sorry it has been so long since I posted here. I am also sorry that I am apologizing, as I have heard it is tacky to apologize for not writing on your own blog. So here I am, back after an absence of over a week, and I've already committed two acts of bad blogging manners. Sigh.

If you are, in fact, still visiting here, looking for updates, I have good news and bad news. First the bad news (it's always best to get it out of the way, no?). . . as the deadline for the culmination of work for my degree rapidly approaches, posting is likely to remain scarce. You see, I must sleep, I have tried not sleeping and it just isn't working for me. So, for the next two weeks, 98% of my computer time will be spent on my project, leaving only 1% for email and 1% for blogging. This means I am also unlikely to do lots of commenting on your blogs for the next two weeks. Don't worry, we'll all be okay.

Now the good news, to which there is two parts. . .

1) In two weeks (or so) I will be totally finished with my degree!!! And that, my friends, will be cause for a huge celebration.

2) I have officially signed up as a member of NaBloPoMo. If you are unfamiliar, that stands for National Blog Posting Month. NaBloPoMo takes place during November, as a sort of slacker response to the National Novel Writing Month, during which you attempt to write an entire novel during November (I'm not joking, it's actually a real thing). During NaBloPoMo, those of us who have signed up attempt to post something every single day for the entire month. I have even added the NaBloPoMo banner to the right hand side of my blog, so I am all official and I can't go back in a week, delete this post, and pretend we never had this conversation. I make no promises about the quality of posting that will occur during November, I only promise to do my best to post daily.

I see this as a good opportunity to share with you things that have been long neglected -- our Disney trip, my rant about children's bed rails (neglected since April), and some other odds and ends from our visit to Wisconsin in August and St. Louis in September. I warn you now that I may have some computer access issues the week of Thanksgiving, but I will do my best. And if you do hang in and read through November I can promise there will be some posts definitely worth your while, mixed in among the days when I can't think of anything more interesting that what Harper eats for lunch.

The rest of October = scanty posting and disappointed readers (really, I know how much you've missed us!).

November = you rewarded for your patience with daily posts!!! Please try to control your excitement.

Up: Harper went to her first birthday party and it was a success -- she was even able to eat cake and ice cream, which can be tricky for children with peanut allergies. Believe me, we did everything humanly possible to make sure it was safe for her, and it was!

Down: Harper decided she wants a cat. When I explained that cat ownership will never be in our future because I am desperately allergic, she suggested I could just go live someplace else. For those of you keeping track, I am now officially less important to my daughter than a hypothetical cat. Nice.

Up: I introduced Harper to her first pair of child-scissors and we tried making some Halloween decorations for the window. Using the scissors resulted in this face: 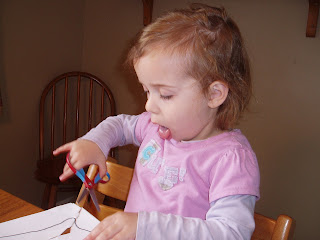 Down: Harper refused any attempts I made to help her manipulate the scissors correctly, saying, "I don't want to do it the wite (right) way Mommy, I want to do it my way!" I am slightly nervous about the future implications of this attitude and how it might manifest itself in school one day. (Since it was our first try with the scissors, I let it go, figuring she has plenty of time to learn to do it correctly.)

Up: We've been on a couple of family walks; Matt, Harper, Rebound, and I. I will not take Harper and the dog by myself because Rebound is a maniac. During our family walks Harper keeps up beautifully, and spends the whole time exclaiming, "I really yike this! This is so much fun!"

Down: I now feel very guilty about the fact that we don't walk more often, since it brings the child as much joy as Christmas morning.

Up: Harper thinks tag, you're it, is the most hilarious game known to man. And my legs are just long enough that she can chase me around the yard and I don't have to actually run.

Down: Playing tag on a cool day sent us to the pediatrician after Harper started coughing and wheezing. She was so non-cooperative at the doctor's office, our doctor told her no stickers and suggested I revisit the incident with an appropriate consequence at home.

Up: One breathing treatment cleared up the wheezing, no dire diagnosis of persistent asthma at this point.

Down: The doctor declared, "She's really stubborn," and seemed totally exasperated by Harper's lack of cooperation.

And finally, you decide, up or down?

Harper has been having fun playing with the magic wand from her dress up box, but all attempts to turn me into a frog have been utter failures.

That should be a long enough post to keep everyone busy for a couple of days at least. I hope you are enjoying October, wherever you are!
Posted by Kelsey at 11:17 AM

ok i'm totally reading you every chance i get, so keep posting. and umm. i may join the "write every day in november thing" since i write at least once a week and sometimes it's several posts at a time, i could spread those out! i'm glad you're not a frog. i got a gigle out of your ups and downs..

Okay, FINE. Have your priorities and all. BE that way. And we will sit here, sad and lonely, eager for November.

More seriously, OH MY GOSH, Kels! You will be finished with your degree in TWO WEEKS!! YAY!!

Good post, lots of funny stuff! I look forward to November... I may try that NaBlahBlahBlah myself. :) Congrats on being almost done with school!

This was really funny, and I'm looking forward to November! I did NaNoWriMo last year, and it sucked! But blog posts--that might be fun!

I think that pediatrician sounds kind of icky. I don't like how he/she talked about Harper, or that he/she withheld stickers, or that he/she told you to discipline her about it later at home. I don't like him/her, and I feel defensive of Harper. Harper is a TODDLER. Toddlers are not tiny model citizens, and they are KNOWN for their uncooperativeness. My score: Harper, 1; pediatrician, 0.

Yeah for almost finished with the degree! Yeah for more blog posts in November! I have thought about doign that myself, so maybe I'll join in the fun.

I agree with Swistle about the pediatrician. I found that a little strange as I was reading your post. You didn't say too much about how you felt about the situation. I think I would have been a little offended.

Hello!
I'm one of Emily's friends and I've read your blog frequently but not commented before.
I have to say that the "no stickers" thing bothered me too but I'm in a funny mood today so may just be ultra-sensitive!
Anyway, love you blogs.