This morning I woke up, got dressed, and went to work! How crazy is that?

We don't have students at my school until next week so I've been doing a lot of organizing of my room. It started out looking sparse but very clean. 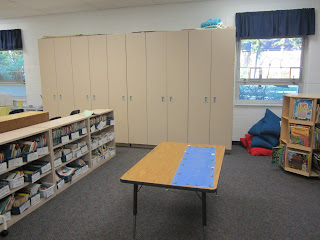 Then I realized I was never going to know what was in all of those tall cabinets unless I took it out and put it back in a way that made sense to me. Things got worse... 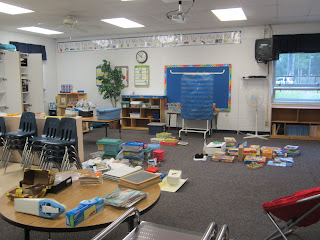 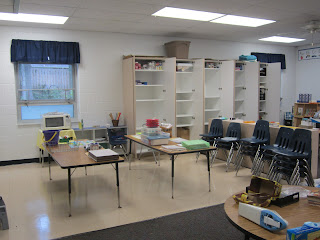 By the end of the day today it was about 1/2 put away. I also attended my orientation, met one of my students (her mom brought her in to get some paperwork from the office), and did a lot of deep breathing.

Harper and Michael start school tomorrow. Last night we all went mini-golfing after dinner. One last family activity before our summer comes to an end. 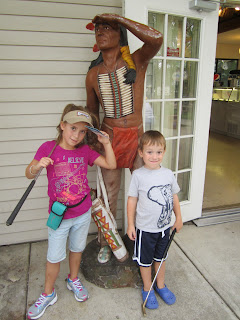 After school today I ran home to get the kids and we all met Matt up at Harper's meet-the-teacher night. Then it was quick dinner, baths, and kids in bed. I've been up doing paperwork for Harper's school, readying lunches (I forgot how I detest that), and making mental lists of everything that needs to happen tomorrow. With any luck I'll remember at least half of it!
Posted by Kelsey at 12:36 AM 8 comments:

After several months of begging me to please get a job (last spring) so she could go to the school daycare with her friends, I sat in Harper's bed tonight as she sobbed to me, "Mommy I don't want you to go back to work." 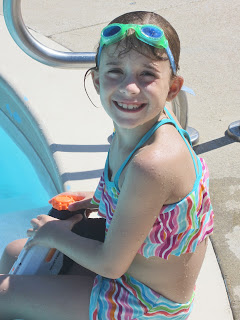 If I were the hashtag sort, mine would be #alittlelateforthat

The last full week of July we spent time with Matt's family on vacation in Michigan. We stayed at a house in Fennville, only a few minutes' drive from the little beach where these photos (and the photo below) were taken.

I was a little bit of a vacation grouch as I'm STILL working on my summer coursework and spent a fair amount of time hunched over the laptop while everyone was swimming. Sigh. I also came home with some fairly gnarly neck and back pain. Vacation fail.

This year Matt's parents rented a house that had its own pool. The past two times we've headed up to this area for vacation we were in situations where we had a long walk or short drive to community use pools. I cannot say enough about how much this enhanced our experience of vacationing with the kids. Especially since there were five or six (one adult was only there for a portion of the week) adults for the two children, someone was almost always game for sitting out by the pool with them. I woke up one morning a little after eight and Harper had already been swimming!

Michael's big accomplishment was learning to willingly let his head go underwater. I know it looks like he's drowning in the following picture, but I just happened to catch him in the instant between when he jumped in (from the steps) and when his flotation device helped him pop back up to the surface. 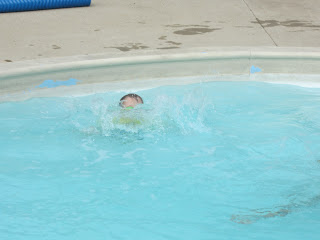 So Michael and Harper were in and out of the pool several times a day for six days. And most of the time Michael was in the pool he was practicing putting his head underwater. 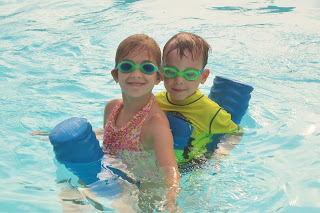 Thursday night of our trip Michael woke several times saying his teeth hurt. We came home Friday and then were up with him through most of the night Saturday as he screamed about his ear hurting. Sunday I took him to Children's Urgent Care and discovered he had swimmer's ear.

I don't know if you've ever dealt with swimmer's ear, but it was definitely the worst illness/affliction we've dealt with in a long time, maybe ever. It was horrendous - we needed ibuprofen and eventually Tylenol with Codeine to manage Michael's pain. He couldn't eat anything but yogurt and applesauce for two days because it hurt to chew. And we got only slightly more sleep than if we had a newborn in the house.

In the midst of this we were going to vacation bible school every day (I was a co-leader of one of the main areas, so no staying home with Michael) and Harper had swimming lessons Monday through Thursday nights.

Even though Michael has (mostly) healed and there were some fun things throughout the week, this picture taken shortly after lunch yesterday really sums it up:

My PSA for tonight - if you're going to let your children swim for hours a day, you may want to make sure they get the water out of their ears.