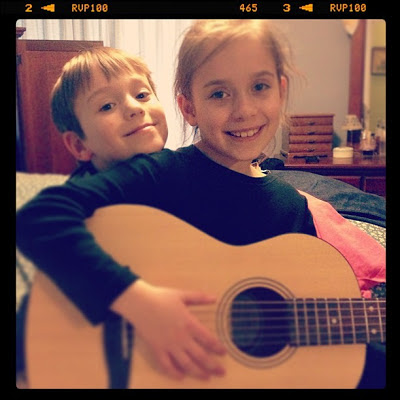 Do they look older to you?

Michael will be FIVE on Saturday, which is completely mind-blowing. We are in the midst of things like kindergarten screening and just signed him up for spring soccer. I know how cliche it is, but seriously, where does the time go?

And speaking of time, there isn't much of it these days. I really thought I would be able to keep blogging once or twice a week while I worked and I think a lot about it. However, when it comes down to it I tend to choose sleep and sanity over computer time. I miss the blogging community though, and I hope to dial back into things over the summer.

The last four weeks have been a special kind of brutal because we have been sick, sick, sick around here. Harper and Michael had no-apparent-reason fevers the first week of February. Then we had a visit from the vomit fairy the second week of February (only for the children, thank goodness). Last week Michael was diagnosed with strep. After three hours at children's urgent care today we realized Harper had an ear infection, which we expected, and pneumonia, which was an unfortunate surprise diagnosis.

Of course with all that illness comes the ever-exhausting dance to figure out which adult is not going where he or she thought for the day. Matt's parents have been hugely helpful, but Harper alone has already had six sick days since February 1st. It's getting a little old. There wasn't one day last week that both of my children went to school.

My job is exhausting and frustrating and lots of wonderful. I have gotten to know some amazing children and families this year. I have worked with some of my favorite people on the planet. Aside from all the sick days and maybe being a little extra tired, Harper and Michael are both thriving in their environments, childcare included.

Soon it will be time to make decisions about what next school year will bring, for me and for our children. I thought by this point in the year I would have a clearer picture of whether we'd made the right decision and what decision we should make going forward. If there was ever a time I wished for a crystal ball, this is it. I never imagined the choice between working and staying at home would seem this difficult. We'll all have to stay tuned to see what happens next.

I am not sure who might still be checking in here, after all this time has passed. Still I would be remiss if I failed to mention that we are once again raising money for March of Dimes and planning to walk in the 2013 March for Babies at the end of April. We've had such amazing support for the event the past few years. I'm hoping a few of you will consider supporting us again - the link is over on the right.