The Saga of Jonah C.

When Harper started preschool, in January of 2008, there was a boy in her class - we'll call him Jonah C. - Jonah C. and Harper didn't become fast friends right away, but she was thrilled to find out that he was in her same class the next year, even though we switched to a different site for preschool. Over the last year and a half Harper and Jonah C. have become very good friends. She likes him, she says, because he is silly like her dad. And he gets in trouble sometimes, but not too much. Mostly, she says, he's a pretty good listener.

Sometime this school year (they are in the same class again) Harper decided that, because they are both silly, she was going to marry Jonah C. She started talking about loving him and how they were going to have silly babies and a silly dog when they grew up.

Harper knew that Jonah C. would not go to the same kindergarten as her - we live in the same school district but they have a different neighborhood elementary schools. When I ended up getting a job for this semester and Harper found out she'd be switching schools, you can imagine there was a lot of sadness over leaving Jonah C.

Her exact words were, "I'm just not ready to let go of Jonah C. yet!"

We told her not to worry, I've gotten to know Jonah C.'s mom and I was confident that we would be able to get the two of the together. We told Harper she wouldn't see Jonah C. when she went to school, but she'd still be able to play with him. (And get married and have silly babies.)

But then last week we had to sit Harper down and tell her that Matt got a new job and we'd all be moving to Michigan. It took a few minutes (and various phrasing) for the news to sink in and once it did Harper started sobbing hysterically. It took a long time to calm her down enough for her to tell us why she was so upset. When she finally caught her breath she said she couldn't tell us why she was upset, but she could show us.

She walked over to the counter and pulled out a red construction paper heart on which she'd written, "I love Jonah C.," and showed it to us.

That noise you heard last Wednesday evening? It was the sound of my heart breaking into a million pieces for my girl.

The initial shock has worn off, but now Harper is trying to figure out how she'll convince Jonah C.'s family that they should also move to Michigan.
Posted by Kelsey at 9:34 AM 9 comments:

All I Can Manage -

are bits and pieces:

-I killed a bug on the family room curtain that I'm fairly certain was a tick. I don't want to know how/why it was there.

-Harper had been working on reading with me last spring/summer and then it got to be kind of an exercise in frustration for both of us so I shelved the issue for a while. The last two nights she has read to me from a book called Mouse Tales with very little assistance from me. Ah - it is awesome! I'm so excited for her to be able to read on her own - she's going to love it.

-Last week was my first full week of full time work and both kids were sick and we had many sleepless nights. To cap it off it took me 2 1/2 hours to drive my 35ish minute commute home on Friday. I'm choosing not to use last week as an assessment of how this job thing is going.

-Speaking of my job, I think I may never have mentioned what it is, exactly. I am now the junior high media specialist (librarian and then some) for a school district a bit south of where we live. The gig is supposed to last until June. I love lots of things about it, but suspect that it will take all semester for me to feel truly competent.

-The kids love their preschool/daycare - LOVE IT. Harper complains when I come to pick them up and we've been told repeatedly by many staff members that Michael is adjusting beautifully and is such a happy child. This certainly makes things easier.

-In related news - it is kind of nice that they get a chance to miss me. I know it is difficult for them in some ways, but I selfishly enjoy being wanted in a way I felt I never was when I was the at home parent all of the time.

-Getting up at 5:30 (or so) in the morning is actually a bit easier than I would have imagined.

-Staying awake long enough to pack lunches and take time to email/blog/comment is much, much harder that I would have imagined.

-Now I know we're only a few days into this adventure, but I'm going to say that it isn't more difficult than being at home all day, it's just difficult in tremendously different ways.
Posted by Kelsey at 8:34 PM 7 comments:

Here is a before we left picture, notice the charming new thing he's doing when asked to smile: 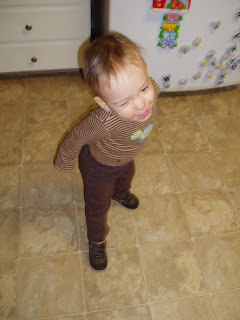 Here he is, posing again, outside his classroom: 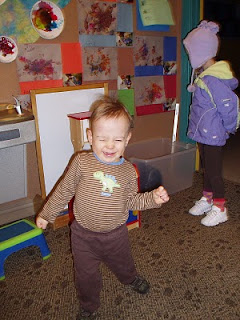 Just in case you aren't catching that face, here's a close-up: 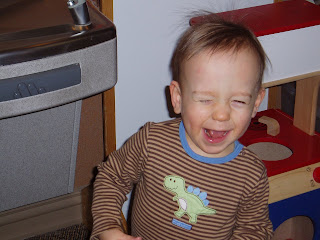 Well at least you can tell he's happy!


Harper's first day came a couple of days later, and the morning was so hectic that we didn't get any pictures at school. Here's what she did when I asked her to show me how she felt about her new school: 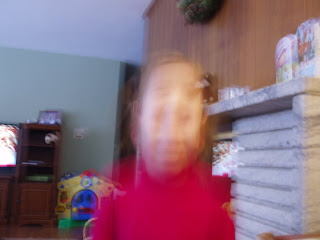 I had to ask her to let me take a less jumpy one: 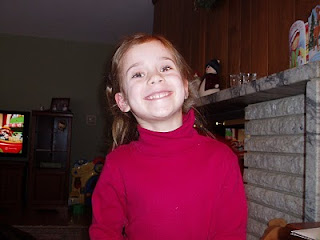 It's mid-week, week one, and both kids are still happy. We're all happy, but tired.

So! I start working full time TOMORROW - what?

The kids are in full time preschool/daycare at a local community center with an awesome program (you may remember that I was disappointed that they wouldn't be going there when I didn't find a job for the fall). Michael actually started "transitioning" last Tuesday and Harper began Friday. So far, so good. Although Michael fell and hit his head on a table as I was picking them up Friday and got the worst goose egg I've EVER seen.

Of course he had a cold now and isn't sleeping well - I've been in cuddling him for much of the last hour and not getting my last before work things finished - which is some sort of Murphy's law of parenting; when you have stuff to do your kids will be sick, the end.

Maybe this week we'll do some photo catch up covering the last week - which included the largest snowfall I think we've seen since Harper was a baby, among other things.

I am woefully behind on reading blogs and getting to that threshold (again) where I think I may just "mark all as read" in the Google Reader and begin fresh. This is a strange thing to say to the internet, but I miss you guys!

P.S. I had just turned 12 about six weeks before that photo was taken.
Posted by Kelsey at 9:48 PM 4 comments:

Things have been pretty topsy-turvy here lately, in ways I'm mostly not at liberty to discuss just yet. Soon, very very soon, I should be able to share what has been going on - talk about my job (though not too much) and explain the impromptu blogging hiatus that seems to have happened here.

In the meantime, please enjoy this photo a former babysitter (now friend) sent to me of a New Year's Eve Past. Anyone want to guess how old I was??? 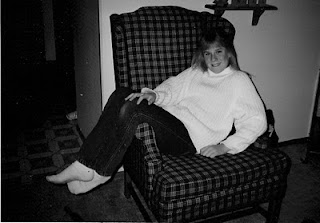 It is not the most embarrassing old photo of me out there, surely, I mean my jeans aren't even pegged! And two bonus points to you if you know what I'm talking about.
Posted by Kelsey at 11:05 PM 10 comments: