A Tale of Two Photos

Recently one of my internet friends, Heather, posted a couple of pictures on Facebook... one was a shot of a happy couple on vacation: the second, wider, shot showed the same happy couple, but also their boys who were tussling a few feet away. It made me smile because we all do that, right? If you have ever posted on social media it's likely you've cropped something or used a filter that makes your dirty floor less obvious or adjusted the lighting to minimize the blemishes on your selfie... I appreciated her honesty.

I can't say that I fault anyone for putting her best foot forward, publicly. We do that in a hundred different ways on a daily basis. We care about the impression we make. It's the same kind of motivation that keeps me from showing up to work in sweatpants. Except on pajama day, I'm ALL IN on pajama day...

Last night I had a small melancholy moment in my inner dialog. It was only Michael and I for dinner - Matt was running a basketball tryout and Tuesdays are one of the nights Harper eats at the dance studio since she's there 4:45 - 8:15. We have several nights on the schedule this week that timing dictates we grab dinner on the go, so I cooked a decent meal, even though there were only two of us. Dinner was rice, green beans, and lemon garlic chicken. I only prepared three pieces of chicken: one for Michael, one for myself, and one for lunch leftovers. Only making three meant that I could use my small dish and I had a mental flicker of the future when I'd someday only be cooking for Matt and myself again. For some reason I decided to document the small dish: 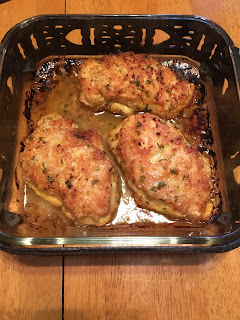 It's not a professional food photo, by any stretch, but it doesn't look bad right? You can probably picture Michael and I sitting down to a nice dinner together.

What you can't see in that first photo was that, since only two of us were eating, I didn't bother to clear the previous day's Costco haul of batteries and light bulbs from the table. The second photo also gives away the fact that Michael won't eat rice without a sprinkle of shredded cheese on top and we just plopped the bag right down on the table. In fact the only thing that was in a nice dish was the chicken - and even that was the dish I baked it in and not a platter or something. 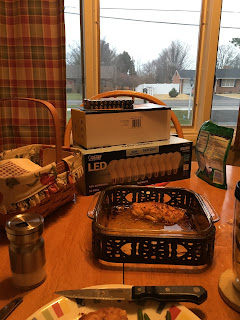 I don't mean to get preachy, but it occurred to me that there are probably many moments in life when what we observe of others presents only a small part of the bigger picture they are dealing with. It's not a bad thing to keep in mind, the fact that there's almost always something else outside the frame.