Yesterday, while Harper was supposed to be taking a nap, I heard this little drama playing out in her bedroom. . .

Thunk!
(Sound of stuffed animal hitting the floor, having been unceremoniously launched from the bed.)

"Oh no! Yehyo (Yellow) Bear fell down! I need my phone!" Pause. "Hehyo? Fireman partment? I need help. The bear is on the fyoor! Oh sank you."

How About Some Swimming Pictures?

For the past month we have been engaged in swimming "lessons" at our local rec center. The swimming lessons have taken place from 9:30 - 10:00 on Monday and Wednesday mornings. 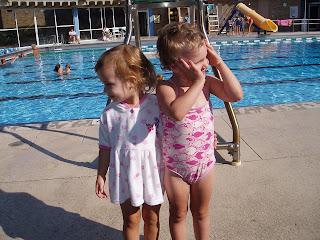 Here, in no particular order, are:

The Top Ten Reasons I Will Not Miss Swimming Lessons

1. The mad dash to get home from swimming, get Harper changed, get myself changed and showered, and be ready to leave for class less than an hour later. Two-year-olds become their slowest, crankiest, most-difficult selves if you are in a hurry.

2. How disgusting I always felt after getting out of the intensely chemically treated rec pool water -- this was no backyard pool. I would smell like pool even after I showered. 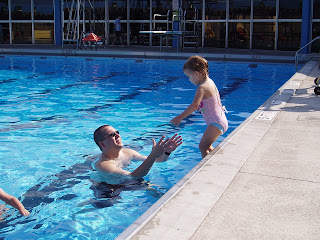 3. Wrestling Harper back into her wet swimming suit if she needed to use the bathroom before we left the rec center.

4. Being out in relative public in my swimming suit. 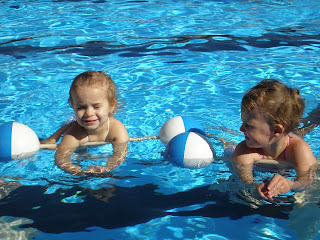 5. The way Harper practically pulled my swimming suit off of me every time I tried to get her to do anything other than cling desperately to my upper body.

6. The way Harper would yell, "Nonononononono!!! I can't byo (blow) bubbles!" loud enough for most of Ohio to hear. 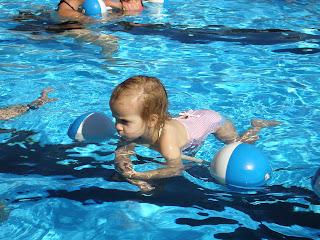 7. The way Harper would yell, "Nonononononono!!! I can't put my face in!" loud enough for most of Ohio to hear.

8. The way Harper would yell, "Nonononononono!!! I can't put my head under!" loud enough for most of Ohio to hear. 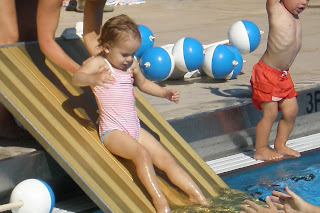 9. The way Harper would actually practice a skill she was supposed to be doing with me, and then as soon as the very perky instructor came over she would clam up, refuse to move a muscle, and scowl at her. Charming.

10. The fact that is has been between 55 and 65 degrees at 9:30 the last few swimming mornings and we've basically turned blue and lost toes to frost bite when getting out of the pool. 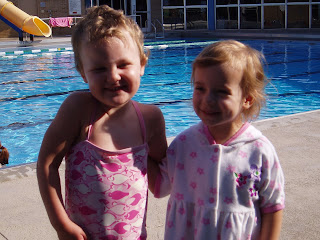 "So why," you ask me, "did you continue to torture the child with swimming when it was cold and she so clearly wasn't interested in any type of swimming instruction?"

Because every time I told her we were going to swimming Harper shouted, "Hooway!!!" and galloped around, fists pumping in the air, doing her little happy dance.

Apparently she wanted to be in the pool. Even if it did make her face look like this most of the time: 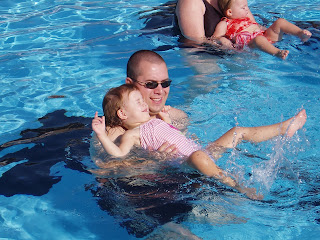 Nope. Not mine. I'll bet that got your attention though!

Her baby boy was born at 8:40 (Central time) this morning.

And I'm not allowed to write the name, as Erin is kind of looking forward to revealing that over on her own blog. But I do know what the name is and it is just perfect.

Erin and the baby are both doing fine. I'm leaving other details out because I know she'll want the chance to set them forth on the Internet all on her own.

Welcome to the world little one, we're so glad you're here!
Posted by Kelsey at 12:07 PM 3 comments:

Scenes From the Park: A Study in Two-Year-Old OCD

The other evening, in order to offset a long and cranky day, Harper and I walked to a park with Auntie M and Atticus. Auntie M and I sat on a bench and vented/chatted, while Harper ran off some steam and proved two things about herself:

1.) If there is such a thing as a two-year-old OCD, she has it. Let's just say she is a little set in her ways.

2.) Her hair does some funky things because of the static on plastic playground slides. 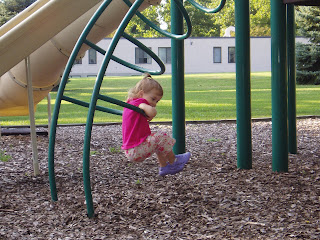 So here's how Harper's "playing" went:

1. Scurry up the steps at one end of the playground equipment.

4. Stop at the giant tic-tac-toe board and spin a few pieces.

6. Slide down, using feet to keep the descent slow.

7. Lay down at the bottom of the slide as though exhausted.

8. Sit up slowly and look at Mommy and Auntie M so they can fully appreciate the impact of the plastic slide on hair.

9. Run across the wood chips, jumping on and off the raised platforms at the bottom of each slide, until back at the steps. 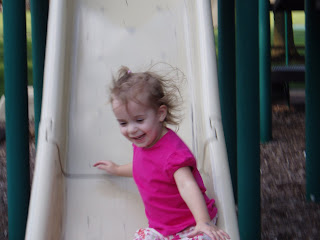 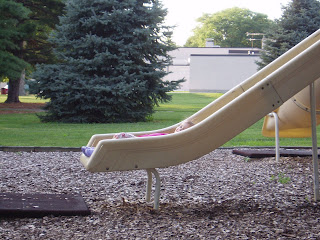 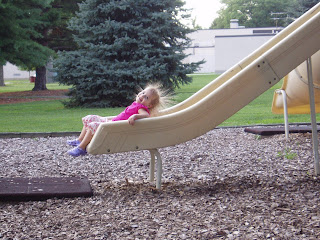 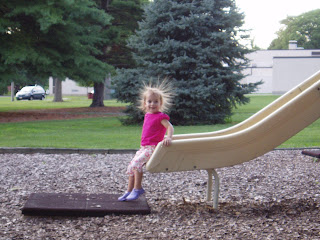 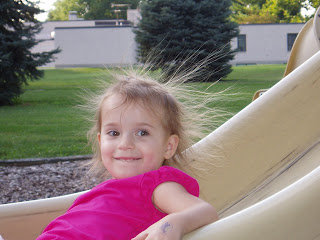 Have I ever mentioned that Harper is a bit. . . particular? 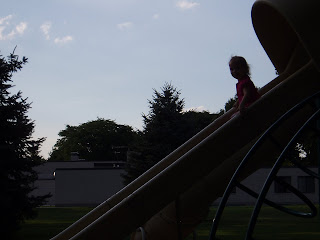 This is how badly I've been doing at keeping up with things, about a month ago Mommy Daisy tagged me for a meme and I'm just now getting around to it.

Here are the rules:

Each player starts with 7 random facts/habits about themselves. People who are tagged need to write on their own blog about their seven things, as well as these rules. You need to choose 7 people to get tagged and list their names. Don’t forget to leave them a comment telling them that they have been tagged and to read your blog!

The last time I "tagged" people I'm not sure if anyone actually did it; so I will amend the rules to say that if you want to do your own seven things you have my blessing. Leave a note in the comment section so we can come read more about you.

Here are my seven:

1) I have completed two marathons. Both seem like a lifetime ago. The first was a great experience and the second was horrible. It is something I would like to do again in this lifetime, but I'd be lucky to run a mile right now.

(I'll bet you never knew I was so sporty!)

3) I played on my high school volleyball team and we were state runners-up my last year. There are three children in my family (2 girls, 1 boy) and we were all on the volleyball team in high school (not at the same time). All three of us played in the state finals for a chance at the championship, but only my sister's team actually won it. Which is kind of nice for her, it's her thing. She was also homecoming queen, but maybe she can put that in her seven if she ever starts a blog.

4) I was a summer camp counselor for six full summers at a YMCA camp in Wisconsin. I loved every moment of it, except maybe the time a camper's parents sent her to camp with head lice and I was one of the many unfortunate people who got it. That part wasn't much fun. I was actually a counselor, then craft director, then leadership training director. There were cabins, a lake, archery, horses, a pool, hiking trails, campfires. . . the real deal. It was seriously awesome.

5) I love Mountain Dew. It is probably my worst habit. I am far to old to be drinking anything with that much sugar. I had nearly given it up and then I started graduate school. Five more weeks and then I will pretty much be finished with that excuse. Then I'll have to kick the habit for good.

6) I will always have soft spot for pop music. Debbie Gibson was my first musical obsession. In college my musical obsession switched to Dar Williams and she's still a favorite to this day. I enjoy all kinds of music, but my favorite is singer/songwriter stuff that tells a good story. I blame it on all those campfires.

7) I love to read and write. And I will read just about anything. I read a steady mix of adult, young adult, and children's fiction. Since I'm getting a school library degree I can pretend all that reading is career related. I'm one of those people planning to go at midnight next Friday night/Saturday morning and get the final Harry Potter book. I've reread the first six in preparation (it was all HP, all the time in June). I have pre-ordered copies before, but this will be my first midnight pickup. If I thought Harper was even the slightest bit old enough to understand what was going on, I would take her with me. 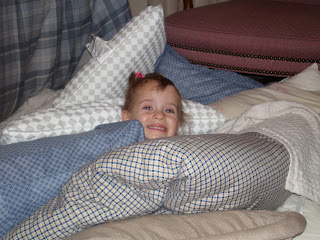 So we've been pretty busy around here, entertaining visitors, taking exciting day trips, and just enjoying the summer. All the while school has been crazy busy and we also went through a period of about two weeks during which I was interviewing for a teaching position for next fall and frantically trying to figure out day care possibilities. Even as I type this, I am in the middle of two projects which are actually due, oh, later today (considering that it is past midnight and technically Wednesday already).

I am not, as it turns out, going back to work in the fall. And I'll even be mostly finished with school by mid-August and I'll have a little more time for leisure computer activities. So some of you will have to be patient (Dad, Kristin) if posting is a little light for the next month or so. I'll do my best. 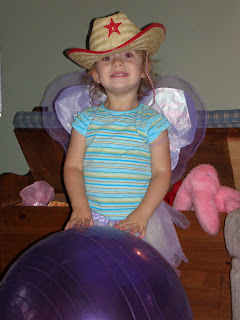 While there is a lot to catch up on here at Midwest Mom, I have just one little anecdote to share tonight. Earlier today Auntie M reminded me of a funny thing that happened when my mom was here a couple of weeks ago. We were discussing the fact that so many children are no longer raised to be respectful, are never told they can't have/do something, don't use manners, etc. My mom looked at Harper and said, "Do you know what it means when Mommy says no?"

Harper struck her thoughtful pose, finger to chin, and didn't say anything for about a minute. Then she raised her head and said, "It means time out?"
Posted by Kelsey at 12:32 AM 3 comments: