Since I haven't posted regularly in a while, I thought it would be good to do a little update from the home front. While I wasn't posting here, the children, as children are wont to do, continued to grow and age.

Michael is now 7 1/2 and in second grade. On the list of new things he is trying this fall - bowling in a league and playing tennis. According to him he is pretty fantastic at both. His feet are still larger than Harper's and I think by this time next year he has a decent chance of being taller than her as well. 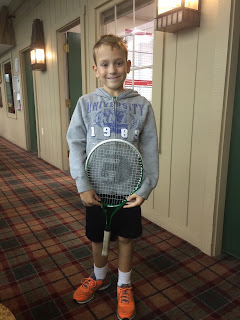 Harper is now almost 11, gulp, and in fifth grade; which makes this her last year of elementary school. She is enjoying queen of the campus status - it's fun to be a fifth grader. One of this year's fifth grade perks was a spirit week just for fifth graders. Below was Harper's self-assembled outfit for Wacky Wednesday: 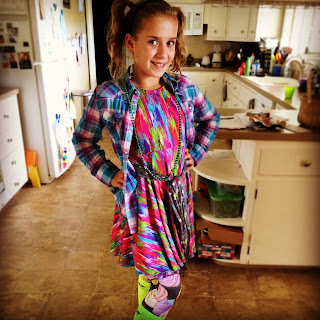 The picture was actually taken after she wore that outfit to school all day. I don't know if the confidence I see is evident to everyone, but it is such a part of who Harper is. I am fairly certain I wouldn't have felt comfortable sporting that get-up to school in fifth grade, or maybe ever. Harper's still dancing up a storm and excited to be part of the school Orff Ensemble, another privilege reserved for fifth graders only.

In case anyone is wondering, I still haven't found Michael's DS.