Wow - as soon as we have a moment where I feel like we're all existing pleasantly the kids go completely bonkers. Right now the difficulty is this: if I want to get anything accomplished during their waking hours I have to deal with the chaos of them fighting and breaking things and screaming and did I mention the fighting?

Michael has developed some sort of sudden onset toddler psychosis - which happened approximately one day before he hit the 2.5 mark. (In case you haven't been hanging on my every word for the last five years just know that from age 2.5 to 3.5 was by far the most difficult year, for me, of Harper's young life.) Michael was apparently visited by the testosterone fairy because he is suddenly prone to throwing things, hitting, and vehemently disagreeing with us.

And Harper, while she is enjoying school immensely, is sort of over it by the time she gets home, and can be generally tired, hungry, and cranky.

Anyway, it helps that they occasionally say things that make me pee my pants laughing. Here are a handful of examples from the last month or so:

1) Michael learned a song about a turtle that ends with hand clap and enthusiastic, "Pop!" But Michael has, among other speech quirks, trouble with final consonants so when he sings the song it comes out, "Pot!"

We were singing the turtle song on the way north for our Michigan trip when Harper piped up and said, "Wow, Michael's really going to know how to say 'pot' when he gets to college!"

Of course she meant because he'd said it so often singing the turtle song, but that's not why we laughed.

2) Michael and I had dropped Harper off at school one morning and were discussing where everyone goes/what they do during the day. Daddy is at work, Harper goes to school, Michael sometimes goes to school, etc.

I said to Michael, "I don't go to work anymore, what do I do during the day?"

To which he replied, "Keen uppa duh pyates!" (Clean up the plates.)

3) Yesterday Harper was looking at the sudoku book I have been working on and read the title, "Light and Easy Sudoku, Volume 2." She paused for a moment and then asked, "Does that mean it is only a little bit loud?"

Because of the word volume...

I laughed for about five minutes and then she looked at me and said, "Are you going to write that down?" 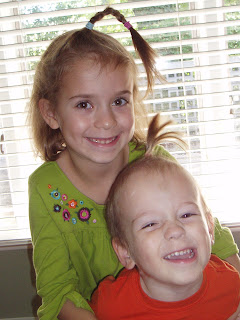 Her tongue sticks out when she concentrates - dribbling on the basketball court and coloring at the kitchen table. She sleeps with a light on beside her bed. She still says "lusually" and "amblee-ance". She reads big kid books by herself but still likes to play with the Little People toys. She is scared of bugs but brave in a swimming pool. 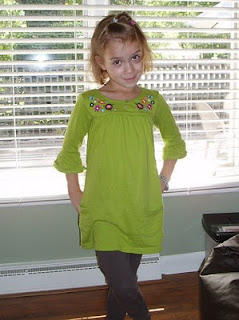 Oh hi! How are you guys?

A couple of days ago a friend of mine called, just to make sure we were okay, because it had been so long since I updated here...

We're all fine - though I won't lie, things have been a little cranky lately. After Michael was sick Harper was sick, and I was away for the weekend (Reuniting with college friends!), and then my mom was here. I just sort of walked away from the blog thing, but I missed it and now I'm back. 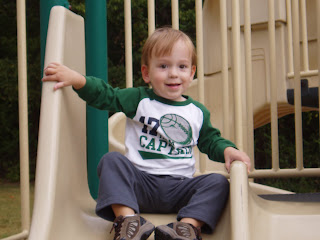 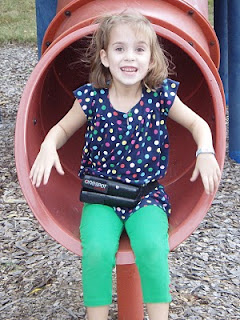 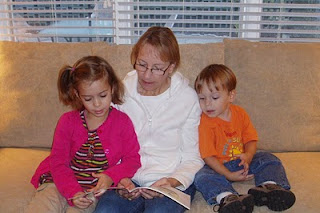 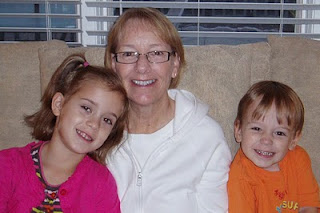 We'll see how the rest of the month goes.

First of all, an update: Michael is feeling so much better! He actually slept through the night last night. He made it to school today, had a great day, and is taking a good nap. Praise the Lord! (Oh man though, I'm really nervous about cold and flu season, having pneumonia when it's barely September does not bode well for the rest of the school year ya know?)

Okay, in no particular order here some things I'm feeling conflicted about:

1) How much to politely interfere with Harper's kindergarten experience.

Based on the work they are doing (and I know it's just been a week) it may take Harper's teacher a very long time to figure out that the child can read and decide to do anything about it. I don't want her to completely change the curriculum for Harper. Trust me, there's plenty of kindergarten stuff she needs to learn. BUT if Mrs. H does have some methods for making adjustments it might be helpful if she had a head's up about Harper's skill level in that area, right? On the other hand, when I taught, sometimes I would get that kind of information from parents and it would actually feel more like they were saying their child was too smart for the grade level and I shouldn't be making said child do ANY grade level work. I really don't want the teacher to think I feel that way about it. (Yes, I'm open to suggestions here.)

Not for the kids, for me! I feel like if I am not watching television at all, it isn't hard not to watch it. If I am watching it (there are many TV series I like, I'm easily entertained) I tend to watch a lot of it. Television and I have kind of an all or nothing relationship. Of course I would still watch football, even if I did stop with the week to week stuff. Do any of you watch TV? What do you like? I'm not too worried about example setting here because I primarily watch after the kids are in bed.

I loved the job I had last spring, LOVED IT. Have I mentioned how much I loved it? It honestly felt like I was finally doing the job I was meant to do. (Er, unless relaxing in a hammock and reading is a job, in which case that's what I need to be doing.) But I hated the feeling that there was not one second to spare when it came to all the things that needed to be done at home. And it seemed like doing things I really enjoyed doing (writing, blogging and blog reading, reading, etc.) all came at the expense of sleep. And I hated trying to figure out what I was going to bring for lunch every day.

Now I'm not working. And I actually have a little free time. And I kind of love that too. I love that I'm blogging at two in the afternoon. I love that I read at least 50 pages of a book today (and did some laundry). I love that I can go volunteer for the PTO fundraiser tonight and not have it mean that I won't see my kids at all today. I love dropping them off and picking them up from school. I love that we didn't have to rock-paper-scissors to see who would stay home with a sick Michael last week.

I have a degree and a job that I'd really like doing, but I'm actually enjoying being a stay-at-home mom more than I ever have. Something that started to feel true last winter, just before I got my long-term sub job. I do feel like it is the right thing for me and our family for me to head back to work at some point. I would have gone this year if I could have found something. But now that I'm not working, part of me feels like it would also be okay if it took five years to find that job.

I think that's enough to ponder for now. What are you hemming and hawing about these days?
Posted by Kelsey at 2:57 PM 10 comments:

Oh you guys, Michael has pneumonia!

Thank goodness our pediatrician is open on Saturday mornings or things may have grown much worse before we realized. He's had a fever for four days now and his sleep is all messed up... Last night I was up with him from about 10:30 until 2 a.m.! Neither of us was at our best this morning that's for sure.

Most of our family plans for this long weekend have been derailed. Fortunately Matt has been willing/able to take Harper out so she hasn't missed all of the festivities. They went to a high school football game Friday night, to a festival yesterday, and tomorrow will head to our local parade - the Labor Day Parade is HUGE in our city.

I have been the official toddler-snuggler/nose-wiper/medicine-dispenser for the weekend. Poor Michael is so pitiful when Matt and Harper are leaving to go somewhere fun and he looks up at me and says, "Me go too?"

At this point I'll just be happy if he's ready to go back to school Tuesday.
Posted by Kelsey at 11:29 PM 9 comments:

We've been back to school for exactly seven school days and Michael was home sick today!

It was not a great day, and the crowning moment may have been at dinner when Harper somehow went flying from her chair. FLYING - feet above the chair - arms flailing - its kind of amazing no bones were broken/no blood shed.

Sidebar: Do others of you have five-year-olds who cannot, for the love of all that is holy, sit still at a dinner table?

In the process she knocked her full cup of milk into the air and it gracefully showered Michael before landing all over the kitchen floor. So in about .5 seconds we went from relatively peaceful dinner to two scah-reaming children, one of them covered in milk, and one dog lapping up milk puddles which would likely induce vomiting.

Have I mentioned that Matt wasn't home?

BUT today was also two phone calls from far away friends, and a few miraculous minutes in which to conduct them in peace.

My complaints are few, truly, though I wouldn't mind getting through tomorrow without anyone being showered in milk.
Posted by Kelsey at 11:39 PM 8 comments: