I am typing this blog post from a hotel room in a Disney resort in Florida. Matt is sound asleep next to me and Michael is sleeping in the next bed.

Harper is asleep in Ohio.

Yes, we actually did go to Disney World and leave our eight-year-old behind.

If you've know us a while you'll know that we took Harper on a solo trip to Disney when she was five. And ever since then we've discussed how Michael would have a turn someday.

Surely some people will think we are cruel or crazy to take only one of our children a place a fabulous as Disney. It wasn't so difficult to leave Michael behind when he was not yet two... Leaving a third grader is was a little trickier. But that experience of being on a solo trip with Harper is what convinced us that we'd definitely do it again with Michael.

My general parenting philosophy has little to do with making the children happy at all times, but it was such a special thing to have that entire week with Harper and to be able to basically respond to her every whim about what she wanted to do or see. In his whole life Michael has never had us all to himself for more than a couple of hours. I believe in this time we are spending with our son.

Harper gets to spend a week enjoying attention from adoring grandparents... we left yesterday and I believe she's already been treated to ice cream twice. She hasn't had much time alone with them since Michael was born. She is happy at school and, while I don't think it would have taken a lot of arm twisting to get her to come with us, she'll be busy and enjoying her life while we're away.

This trip will be different from when we brought Harper - we have a couple of extra days to explore the parks because Matt is taking two days to work while we're down here so we extended the trip a bit. With Harper we always got up in the morning and kept at it all day. Michael doesn't quite have her stamina so we may have to take more frequent breaks or do more pool time this trip than usual. We'll see.

For now I'm glad to be here with my boy and I'm grateful for the cell phones that make it so easy for me to check in with my girl. I'll let you know how the rest of the week goes.

For a long, long time I fought hard for our family to have calm weeks, dinner together, and not be rushing around from place to face like crazed maniacs. I won the battle for several years. Recently, it appears, I have lost!

Up until this year I would say we sat down, ALL of us, to a family dinner five or six times a week. This week I think we'll be lucky to be together three times... Some of this is due to changes in Matt's job. He has more of a commute than he used to which impacts his ability to be home on time to eat with the children. Harper, Michael, and I still sit down together, but even that is becoming more of a challenge.

Dance is taking a much larger roll in our lives this year and that's a big one because it is a commitment that goes on all school year. So does Michael's swimming lessons. Then, throughout the year, we are going to have things which come up on a temporary basis. Right now it's soccer.

This first picture is from Michael's first soccer game, back in April. I never got around to writing much about it then. Let's just say Michael did not appear to be gifted on the soccer playing front. I spent exactly zero time worrying about this. He loved playing and was so happy and excited every time, even if he barely managed to kick the ball. 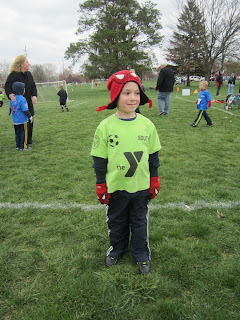 After Michael played in the spring Harper decided she wanted to try soccer.

The soccer program we attend is through the YMCA - so it is focused on sportsmanship and learning basic skills, the time commitment is relatively minimal, and the price is right. We decided to let Harper give it a try, even if she was only in it for pink soccer socks.


Harper did... better than expected during her first practice. She might be the kind of child who just has a little natural athleticism and will be able to "pick up" sports throughout her life. I think she's going to enjoy it, but doesn't know the game at all. Even if she doesn't fall in love with soccer, this is a good experience for her because she's learning to deal a little with being in an uncomfortable situation. She nearly scored a goal in her first game but didn't seem like she really understood what she was supposed to do or where she was supposed to go. I'll be interested to see how it evolves.

Harper and Michael practice on the same night, but her practice is an hour before his. About fifteen minutes into her first practice I received an email saying Michael's was cancelled. I was thrilled not to have to sit in the rain for another hour. Michael, on the other hand, was a little dismayed. He borrowed a ball from Harper's coach and did some independent practice for a while.


Somehow I failed to get a photo in which you can see Harper's face on the day of her first game. So maybe the second child thing applies here - since she was the second one to try soccer I didn't think to take as many pictures! 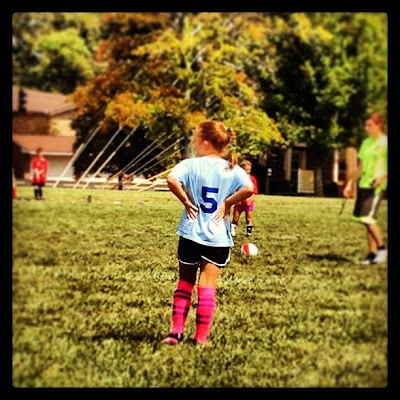 As the children get older I find myself struggling with different things about parenting. Right now one of them is how to set the kind of limits that allow them freedom to try different things, without making us all crazy by letting them try everything. I think soccer will turn out to be a good choice for the fall and then we'll see what winter brings.