Last summer we spent several days at a local swim and tennis club as guests of a good friend who is a member. This year we bit the bullet and joined the pool ourselves. We had lots of fun going to the pool with our friends last summer, but I did have a tiny bit of doubt about how it would go if we went on our own.

The pool is open for this Memorial Day weekend, though it won't be officially open for the season until next weekend. We have a stretch of glorious days forecast so I knew we'd try it out this weekend. We went for a couple of hours today and it was a smashing success. 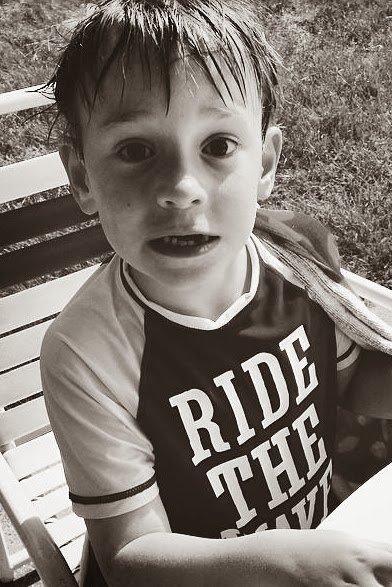 I should clearly state that I was completely in favor of joining the pool. I lobbied hard to convince Matt that it was a good idea. Despite this, I still had a few reservations. Here are some of the things I was worried about:

-My children wouldn't have fun if they didn't know anyone else.
-I wouldn't be able to get over the discomfort of wearing a bathing suit in public.
-Every rest break would turn into an argument about buying food from the snack bar.
-The children would want to go home after we'd been there for 25 minutes.
-Michael would only go into the pool if he was clinging to me, baby monkey-style.
-The process of getting ready to go to the pool would siphon the will to live right out of me.

As it turned out, none of these were really a problem (today). There wasn't anyone else we knew when we first arrived and it took Harper about thirty seconds to make a friend (she's good like that). Michael got into the pool with me, but was minimally clingy and later got in on his own. They only asked for snack bar snacks once and did not argue when I denied their requests. They did not want to go home after 25 minutes. They also did not want to go home after two hours, which I'll take as a good sign. I'm never going to love wearing a bathing suit in public, but I managed NOT to think about it the majority of the time we were there.

As for getting ready to go... I'm hoping that gets a little easier as we go along. It took about half an hour to gather towels and pool toys and snacks, to get into suits, and to apply sunscreen. As we go along I think I'll have a better idea about what we actually need and how much the children will actually eat.

If anyone has tips for maximizing pool enjoyment with children I'm open to them, but, based on today, I think we're all set for a very nice summer by the pool.