Coming Up for Air

Monday I volunteered at Harper's school in the morning and I'm one day short of completing a four day in a row subbing job, which has been fun but tiring. I come home ready to collapse in an exhausted heap except there is dinner and laundry and hair washing and lunch prep and, "Oh look someone pooped in his pants." (Yes, I can hear all of you who do this all the time laughing.) The children I'm subbing for are testing me because they miss their teacher (they are first graders), the children at home are testing me because they miss ME. Let's just acknowledge that that is a lot of testing for one person - thank you.

Because time feels like it is slip sliding away Harper and I did an after dinner run to the craft store. We needed materials for her 100 days of school project and tonight seemed like the best chance to acquire said materials without both kiddos in tow. I greatly underestimated how quickly I could navigate the craft store with Harper. Also underestimated? The amount of patience the outing would take. I could practically hear some alarm going off in my head screaming, "Insufficient patience level reached! Abort current activity! Abort! Coping abilities reduced to dangerously low levels! Code red!" Harper pretended to fall asleep on the way home - perhaps she was trying to avoid unleashing the wrath?

We've been talking to (nearly 4-year-old!) Michael about redecorating his room, which still looks essentially like it did when we brought baby Harper home from the hospital to live in it. His only requests? The color blue and party hats. Party hats? Maybe this is what he means by party hats?

Harper was looking at a painting of the Last Supper and said, "Hey! There's Jesus and his twelve Recyples!"(Pronounced like a cross between disciples and recycle.) So, you know, those Sunday School classes are totally paying off.
Posted by Kelsey at 9:33 PM 2 comments:

Because I'm Not Sure I'll Remember

A funny/curious thing happened in our living room Christmas morning... Michael began turning his back to us when he opened his gifts: 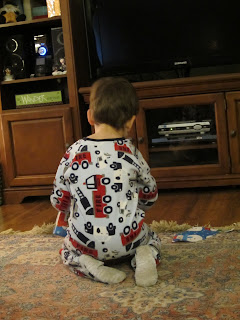 Oh dear boy... he insisted upon taking every last bit of the wrapping paper off before really looking at a gift to see what it was. We think he turned around because he didn't want anyone (read: Harper) telling him what his gift was until he was ready to look at it himself.

And if that doesn't shine a light on their personalities... Harper roaring ahead, without all that much regard for the speed of those around her; and Michael, oh Michael, taking his time, not wanting to miss any detail.
Posted by Kelsey at 10:48 PM 4 comments:

That noise? Was me blowing the cobwebs out of these corners.

So how are you?

We're fine here, truly, and I have no good explanation for my absence from this space. Can we just move forward and pretend it hasn't been several weeks since my last post?