I Have a Friend Who Wrote a Book!

Way back in my college days I was fortunate enough to meet Jen Violi. We worked together on campus ministry projects and became friends. Easy to do as she is such a marvelous person. Here is a photo of us from St. Patrick's Day 1999: 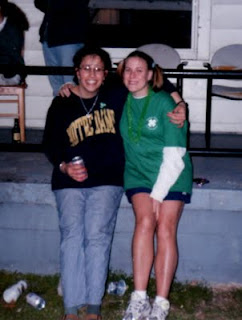 (Hello college! Yes, my hair is in pigtails, it was a party...)
Flash forward to 2000 when I moved back to my college town to begin teaching Jen and I became roommates. We had two great years sharing music, movies, books, wine, Gilmore Girls, and our own stories. I didn't have to know Jen for very long to realize what a talented writer she was. And apparently I'm not the only one who things so because her first actual novel has been published! She will have a book, available in libraries and bookstores, with hard covers and a picture and HER OWN NAME ON IT!
Hooray Jen!
I am kind of in awe that I know such a phenomenally talented person and am fortunate enough to call her my friend. I am not-so-patiently awaiting the arrival of her book, which I pre-ordered of course. Today is the official release day and I'm starting to rethink my pre-order, because it means I could have the book today but it isn't in my actual hands yet... Come on post office, get a move on!
You know, you can order Jen's book, too, if you are so inclined. It is called Putting Makeup on Dead People and is available lots of places, including Amazon. I haven't read it yet, but I'll be sure to let you know how it goes.
Congratulations my friend! I know this day did not come easily and I'm so proud of you.
Posted by Kelsey at 4:06 PM 4 comments:

I realize I’m late to this particular party but a couple of weeks ago I read Catherine Newman’s Waiting for Birdy. Is it any surprise that I loved it? As I turned the pages I was simultaneously cursing myself for not having read it much, much earlier (when I was pregnant with Michael would have been a good time) and feeling an odd sadness as I was reading it, that I would never again get to read it for the first time.
I loved everything about that book so much that I happily would have crawled inside and lived in those words.  While I read I wanted to BE Catherine Newman but, perhaps, with less tofu. (I love her writing but she’ll never be a kitchen muse for me, too many beans and nuts for our allergic household.)
Tofu aside, there is a lot to admire in those pages. I especially would have loved to carve out a life in which writing was my job – to earn money doing something I love, something to punctuate the space between laundry loads and bedtime stories, and to do it as well as she has.  Catherine Newman has a way of describing things that makes me recognize and feel my most ordinary and everyday thoughts as though they were remarkable revelations. I was struck, over and over, as I read, thinking, “Yes, that is it exactly!”
As much as I’m sorry I didn’t read this sooner, or when I was in the same position with one child at home and waiting for a second, I don’t think I’d hesitate to offer it to any mother, regardless of the age or number of her children. So if you are one of the probably five or fewer mothers on the planet who has not read Waiting for Birdy please go do so – right now!
P.S. I sprained my ankle AGAIN. I can't even begin to say anything else about that right now.
Posted by Kelsey at 1:24 PM 6 comments:

Let's ignore the fact that I haven't posted in 9 days and just jump back in, shall we?

Six-year-old's spelling question, "Are there two t's in 'water'?"

We got home from the school run at lunch time yesterday, I opened the basement gate to go and move some laundry and inadvertently shut the dog in the basement. Then he pooped. To say it has been wet here lately would be an understatement.  And I guess we've done too much running the dog out on the leash and not enough giving him time loose in the back yard. So poop in the house? Totally our fault. Still I was not particularly thrilled with adding "cleaning dog-soiled carpet" to my to-do list.

This time of year means resumes and cover letters and then wondering if the ringing phone means an interview and if the interview means a job. Not my favorite cycle - especially since so many interviews in the last three or four years have NOT turned into jobs. But here's the thing - I'm ambivalent about whether or not I actually find a job for next year... The type of job I want does not come open very often and is highly competitive, at least in our area. So if I EVER want to go back to working outside the home (I do) I pretty much need to apply for any available positions. Last year there were two positions open in a district I would have loved to work in - I had a couple of interviews and was really excited about the possible jobs which didn't end up being offered to me. I'm trying not to think too much about the possibility of a job and how that would change things for our family (in ways good and bad). I'm trying to let things happen as they should. Still, I'm finding it difficult not to obsess - an especially bad habit as the schools may not even begin conducting interviews until summer break.

We're having chicken casserole for dinner tonight - you?
Posted by Kelsey at 5:33 PM 4 comments:

This morning Harper asked me if I was wearing mascara. Sometimes I do, but today I wasn't.

Funny, right? If I am dressed up (and mind you, that doesn't take much) Harper will often comment that I look nice, but apparently she doesn't like it, she's just already been socialized to comment when I appear to have made an effort.

It reminds me of experiences I occasionally had with my first graders when I taught many years ago. 99% of the time I wear my hair pulled back. This was the same when I was a teacher. On rare occasions I would wear my hear down to school, here are a couple of the comments I would get:

"Miss M - your hair got long!" (As though it was wondrously longer overnight.)

"Your hair is different. I don't like it. Can you put it back the usual way please?" (That from a very dear little boy who was NOT a fan of change.)

These Kids of Mine

The children have been cracking me up lately - these aren't especially coherent thoughts, but here are some recent examples:

Michael, we think, has an imaginary friend. He's been talking a lot about Miriam lately - and for a long time I thought he was talking about my friend's daughter Miriam. Until yesterday when he was practically in tears on the way to school because he forgot to wake up Miriam. I asked where Miriam was and he told me, "On the floor next to my bed." So yes, I'm pretty sure a new imaginary friend has entered our lives. I told him I'd wake her when I got home from dropping him at school and he said, "Sank you Mommy."

Another Michael story - he has picked up a new phrase, we think from the speech therapist at school, and now often asks us if we're able to do things. As in, "Mommy, are you able to get me some milk," or, "are you able to pick me up from school?" It is so stinkin' cute!

Harper has been cracking me up with her writing lately - she can be oddly formal when she writes something. Over the weekend she was going to attend a classmate's birthday party. I gave her a blank birthday card to write in and here is the message she came up with all by herself, "Dear A, Happy birthday! You're a friend who will never be forgotten. Love, Harper" I have no idea where she came up with that - A's parents are probably going to think we're insane.
Posted by Kelsey at 11:02 PM 4 comments:

Saturday dawned, well, not exactly bright and sunny, but NOT raining which was good enough for me. After literally months of begging for funds, we were able to put our feet where our mouths were, or something like that. This year's March for Babies will also be know as, "That time when both children basically refused to cooperate for the same photo."

This one looks okay, but only because their sweet faces are so far away. 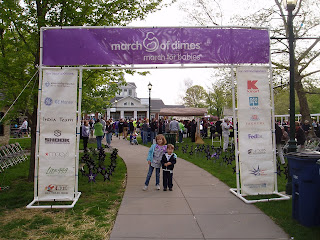 Our March for Babies walk takes place in a local historic "park" where several ancient buildings have been brought to rest. Here are the children sitting on the porch of one of them: 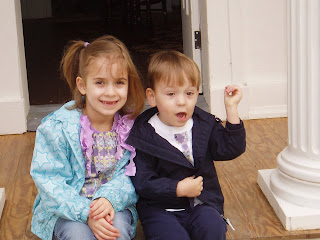 We timed things so that we didn't have to wait around too long before the actual walk began. 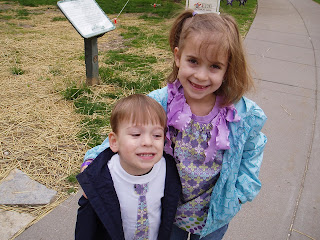 Things started off well. Then, after about three minutes of walking, Harper lost a balloon she'd been given and became practically inconsolable. I love the idea of all of us walking this event together every year. I don't always love actually doing it... to be fair, three miles is a pretty long walk for a six-year-old. 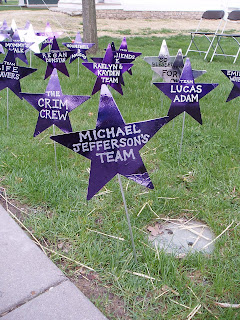 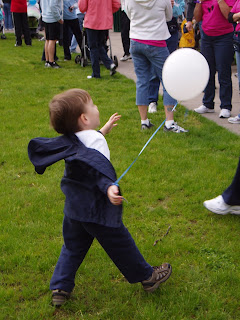 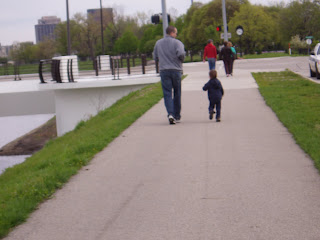 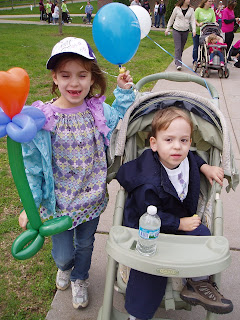 I did even manage to remember to think thankful thoughts a few times during the walk - grateful for my two children who were there with me and feeling compassion for those whose babies will never walk with them.
A HUGE thanks goes out to all of you who supported us with contributions and well wishes. 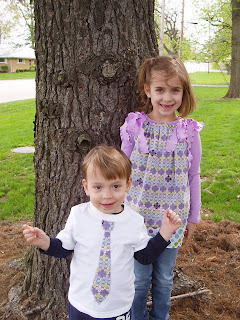