The Dance Bug is Contagious

This year marks Harper's 4th year of competition dance. She was in third grade when she began, which means Michael was in kindergarten. One day a week my mother-in-law took Harper to dance, which meant that Michael and I took her the other day. Instead of trying to entertain Michael in the dance studio lobby for an hour and a half, I decided to put Michael in the tap class that went on during the middle half-hour. He ended up loving it and has taken tap every year since then. Last year he also joined a "pirate" dance class that was just for boys.

At the end of last season Michael was asked to try out for the competition team for this year. At first he didn't want anything to do with it - his immediate answer was no. I wasn't interested in forcing Michael to sign up for something that would take up a lot of his time and limit his ability to do other activities; however, I knew his not wanting to do it didn't have anything to do with dance. It had everything to do with not wanting his friends to make fun of him. We encouraged him to take the audition classes and promised we wouldn't make him do it if he ultimately didn't want to.

Michael did take those audition classes, one jazz and one ballet, and he loved them. We didn't end up doing any convincing at all - he was sold. He wanted to dance.

Flash forward to this year... Michael is dancing with the competition group. He's dancing a little over four hours a week. It took him a couple of weeks to get used to doing a quick change into dance tights two days a week after school, but he's got the hang of it now. He loves it, he's excited about it, and he's proud of what he's learning. Every class he working on musicality, strength, balance, and flexibility. I hope he's learning to respect his body, and, perhaps more importantly, the bodies of the dancers around him.

It remains to be seen whether Michael will enjoy the actual competitions this spring. I have no idea whether he'll want to do it again next year. I know he still doesn't want most of his friends to know about it. But here he is, waiting for his ride to dance a couple of weeks ago: 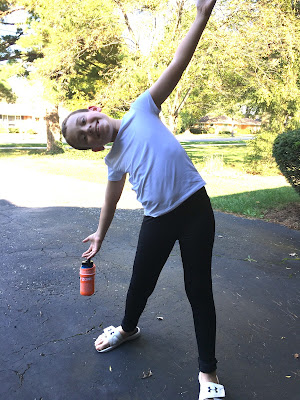 I quietly, though publicly, embarrassed myself on Twitter today.


I saw a question, posed by an author I follow, asking for suggestions for a picture book that might make a case for moving away from Columbus Day toward Indigenous Peoples’ Day. Right away I responded with a book I’d felt proud to use in my classroom years ago, one that provided an alternative perspective on Columbus’s arrival, one that I felt would open student’s minds to the notion that there are many angles from which to view historic events. Almost immediately another Twitter-user, one who had been tagged in the original tweet, responded with an emphatic, “no, not [the book I’d recommended].”


I was taken aback, at first, and embarrassed. I thought about just deleting my tweet, but stopped, because there may be other librarians/educators out there who had the same thought. So I summoned the courage to apologize and ask, “Why not?”


The person who had tweeted not to use the book I suggested responded, thoughtfully, and as thoroughly as Twitter allows, and explained why the book I mentioned wasn’t a good representation of Native society. She also pointed me toward a critical essay of the book.


I’m going to be honest and say that I never would have realized how problematic that book is. And it has left me uncomfortable and wondering how many more books have issues with their cultural representations that I’m not equipped to recognize.


I looked back to the review sources I typically use when I’m evaluating books to purchase for the middle school library where I work. None of the reviews for this particular book indicate it is as problematic as it is. So, where do I turn? I rarely have the opportunity to read a book before I purchase it, and I certainly haven’t read everything I’ve ever purchased for the library. I have to rely on reviews. If the reviews aren’t going inform me about cultural misrepresentations and I’m not going to pick up on all of them myself I guess I’m bound to make mistakes?


By and large, I have lived a privileged, sheltered life. Being aware of that doesn’t necessarily make it right and it doesn’t work as an excuse for everything I don’t know. I’m overwhelmed by the responsibility of doing better for my children and my students. I’m not sure how to fix it.


I do know that I learned something in my embarrassment today. I’ve added another layer to lens through which I read and evaluate books. I hope I’ve taken a small step toward a bigger awareness.
Posted by Kelsey at 9:32 PM 5 comments: