I was fortunate enough to have various camping experiences growing up and for years I've been wanting to share that kind of experience with my children. Unfortunately I hadn't done any actual camping since I was a camp counselor - a couple of decades ago. Even then, there were things about camping that I never had to figure out for myself. For example, the camp cook packed all our food for us, all we had to do was pull out the list of what we needed for each meal and cook it!

As much as I wanted to take the children camping, there were a couple of things holding me back:

1) Camping requires a fair amount of stuff - very little of which we already owned.

2) The fact that I was the only person in our family with any tent camping experience whatsoever.

My first major problem was solved when I found a good deal on a tent, back in September of 2014.

We finally broke it in last July, camping for just one night at a KOA not too far from our house. I chose the KOA because it was relatively cheap - if the weather had dictated cancellation of our trip, we wouldn't have been out too much money. I also chose it for newly renovated bathrooms - I knew that too rustic or distant a bathroom was likely to scare my people off of camping forever.

So off we went, we survived, and we even had a good time. 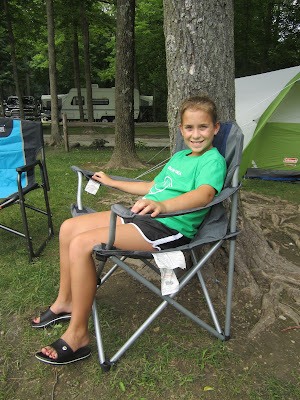 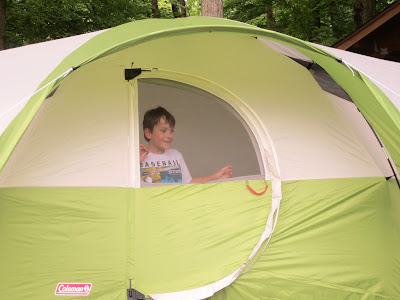 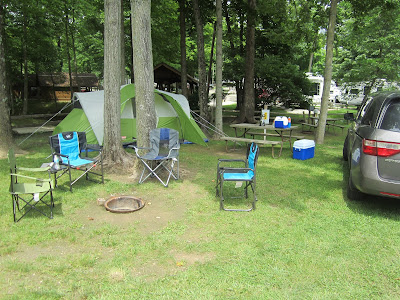 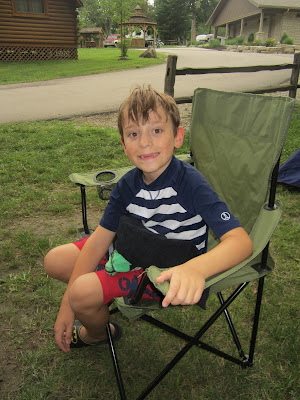 The KOA was close and the bathrooms were nice. It also had a pool, which was beneficial since it can be HOT in Ohio in July. The disadvantages of the KOA were that it was crowded, a little noisy at night, and there wasn't a ton of room to hike or explore. If we'd spent two nights there I think we would have had to leave the campground to find things to do.

Then there was this: 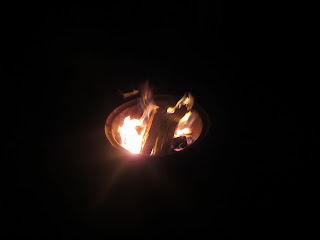 That's the essence of camping for me. When it gets dark and quiet(er) and you sit around your campfire...there's an intimacy among the faces in the flickering light. Never mind that building and maintaining the fire ended up being a little more difficult than I remember!

We are going camping again soon. Not at a KOA this time. We're trying something a tad more primitive and we're going for two nights. I'm optimistic.

I want my children to have memories of camping and I believe they will. I don't think they'll remember sweating while we put up a tent, or a fire that doesn't want to start, or mosquito bites. I hope they'll remember the peacefulness that comes from being a little unplugged, the faces of their family by the light of a fire, seeing the stars, telling stories, and just being together.

The Internet is Strange

I just had an unexpected trip down memory lane.

There is a moisturizer I like to use on my face that has become difficult to find. It finally occurred to me today that I could look on drugstore.com. After finding it and attempting to check out, I realized I already had an account on the site. I couldn't, however, imagine what I'd purchased from drugstore.com in the past.

When I checked out I noticed that a message said they would add the items to my "list" for future ordering.

It turns out the old items I ordered were still on my list. It was actually just one item, ordered in June of 2007.  Want to guess what it was?


A box of pregnancy tests - the very ones that told me Michael was on the way.

That was not something I expected to think about today.
Posted by Kelsey at 3:03 PM No comments: