On Thursday, last week, we went back to the allergist to get the results from Harper's allergy blood work (who knew there was such a thing!). The tests showed a "class three" allergy to peanuts. Basically she is really allergic and we will continue to impose the Great Peanut Product Ban on our house and all who enter here. The better news was that the blood tests did not show any allergy to the five tree nuts they tested for. (A prize to the first person to properly identify those five nuts.) The allergist said this makes her 75% certain Harper isn't allergic to tree nuts. To be 100% sure she will also need to do a scratch test, which is about as pleasant as it sounds.

Harper is going through a stage where she is completely terrified of anything remotely resembling a doctor's office. She was in pretty full panic mode the entire time we were there. She was actually fine in the waiting room, until the nurse came to let us know we could go to the examination room. As soon as Harper saw the woman in scrubs, she lost it. We decided to hold off on the scratch test until she is two, at which point the doctor seems to think she will have mellowed a bit. We'll see. This appointment was nearly two full weeks after our first one and I heard one of the nurses say something like, "The one who doesn't like doctors is back!" That's right, she screamed loud and long enough to be remembered. A drama queen already.

In other news, Harper's allergy has not disturbed her ability to make a mess. 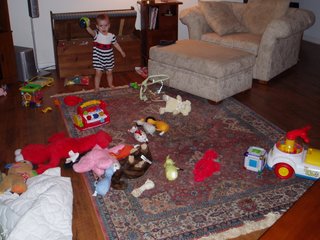 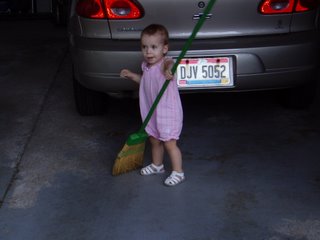 Give me another month or so, I'll have her sweeping up the lawn clippings on mowing days!

But what about PECANS!?

Do I get a prize?

What if I tell you the origin of the CASHEW!? Will I get an extra special prize??