Harper is a child of many nicknames. Matt sometimes calls her "Harp." My sister calls her "Hammy," or "Hamster." She's been called "The Great HAM," "Monkey," "Pumpkin," and "Pudd" (short for pudding). I have called her many of these names and others like "Missy," or "Stinker." The name I most often call her, besides Harper, is "Peanut." She has been my little "Peanut" for as long as she's been on this planet. So you can imagine my dismay when one of the things we have been grappling with of late is the fact that Harper appears to be allergic to peanuts!

I didn't post about this earlier, we've known for over a week, because I was just really upset about it. I feel like I've used the last few days to gain a little perspective. There are certainly many worse things we could be dealing with. Many, many people live with serious food allergies. I know this, but only one of them is my kid.

We spent lots of time last week ridding our house of any nuts, peanut butter, anything containing peanut flour or peanut oil, and anything with a label that said something like, "May contain traces of peanuts." We asked the allergist if Matt and I could eat the stuff and her response was something like, "Sure, but then you have to brush your teeth, wash your hands, sterilize the counters and tables, burn your dishes, and fumigate the room you ate in before you even think about your daughter." So we just got rid of the stuff. I may be exaggerating a bit, but she did say that even baking peanut butter cookies could cause a reaction because of what is released into the air as the cookies bake. We don't know yet if it's just peanuts or if she's also allergic to tree nuts. We had some blood taken to test for those allergies. We'll meet with the doctor again later this week. I will keep you posted.

We are armed with Benadryl for minor reactions and epi pens in case of a major one. It's a little daunting. We can manage her exposure in our home, but what about the world at large? Going to school? Other people's homes? What about when she's a teenager and carrying around a fanny pack containing your epi pen is simply NOT COOL?

There is a small, small chance that she'll outgrow this. That's our hope. But, if not, we'll all learn to live with it. Fortunately Rebound doesn't speak. If he could he'd be saying, "Dudes, where's the peanut butter you used to stuff my Kong with?" I think he's forgotten it already.

In other news, Harper has started to climb, and I mean seriously climb, anything she can think of. The other day she was standing in front of the chair to my desk grunting and the next thing I know: 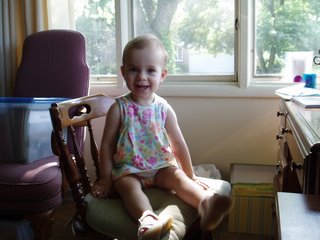 After I snapped the first picture she grabbed a pen off my desk and looked down as if to say, "You can go now, I have work to do." 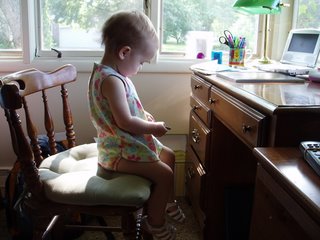 I think I feel my hair going white!

Just wanted to say thanks for the graduation card! You made my day, I love mail :-) I'm all packed for Africa and can't wait.

I'm sorry about the peanut thing, hopefully Harper will outgrow it! Peanut butter is such a staple in life, but I guess one can learn to live with just a jelly sandwhich ;)

Anyway, take care and thanks again for the mail.
Love, Megan

Awww, Kels, I'm sorry to hear about the peanut allergy. I would be really upset about it too, so don't feel bad about that. You just want so badly to protect them from everything and when something potentially serious like that comes up, it can make you feel helpless.

For what it's worth, Harper looks so happy and healthy. You guys are doing a fantastic job and will figure out this curve ball.

Man, this stinks, huh? But you guys will get through this, and I am sure that peannut allergies somehow build character. Hang in there, love.

Incidentally, I love that Rebound refers to you & Matt as "dudes".