Don't Send in the Clowns

I still have a few wedding things I'd like to share, but something happened this weekend that I want to post about while it is fresh in my mind.

If you know me on Facebook you may already have gotten the very short version of this story, feel free to skip ahead.

Harper had been invited to a birthday party for this past Sunday afternoon. We were sort of surprised to see the invitation because it was for a friend from preschool, someone we hadn't seen in over a year. I made the awkward phone call to RSVP which, for me, always entails asking about the food that would be served. As it turns out the birthday girl also has nut allergies - my initial reaction was that it would be the easiest birthday party ever, no need to worry about food. But then the mother went on to tell me where the cake was coming from - a local place that is not a nut free bakery. In fact, it was the same place that made the cupcakes for my brother's wedding. And we were told, very definitely, that the children should not eat those... Even the pretzels they served were a brand we NEVER buy because all the products have cross-contamination warnings on them. Everyone handles food allergies differently - and that alone is a topic that I could go on and on about. Fortunately this is NOT a post about Harper having a reaction to food at a party!

The birthday party was at a local park and the big entertainment was a clown/magician. Shortly after the party began, as most of the adults sat together under the picnic shelter, the children gathered in the grass to watch the magic show. A few minutes into the show, Harper was suddenly at my side, absolutely hysterical. She was sobbing and clinging to me and for what felt like a long time I could not, for the life of me, figure out what had happened. I worried that she'd been stung by a bee but I had no idea what she was saying.  She was causing such a ruckus that I ended up walking her away from the picnic shelter to try to help her calm down.

After a little more conversation I realized that the clown had told the children that if they did or said a certain thing, she was going to open the sandwich and spray them with peanut butter!

Spray them with peanut butter.


Now, I am sure the clown never intended to actually spray peanut butter at the children, but I certainly understand why Harper reacted the way she did. Incidentally, aside from Harper and the birthday girl, there was another child at the party with nut allergies. While I realize the world is always going to have nuts in it, I'm thinking the clown may want to drop that bit from the magic act.

Once Harper calmed down and I promised to sit with her for the rest of the magic show (one of the other parents assured us the peanut butter portion was over). I was really, really proud of Harper for deciding to stay and have fun with her friends. If she had asked to leave (I mean after her initial panicked reaction) I probably would have taken her home.

As I sat with her in the grass, watching card tricks and appearing bunnies, I had to work pretty hard to hold back my own tears. I couldn't stop thinking about how terrified she must have been, thinking she could be sprayed with peanut butter at any moment, worrying she was about to have a reaction.

The rest of the afternoon passed without further incident - all's well that ends well I guess. And Harper did come home with some pretty awesome mermaid face paint: 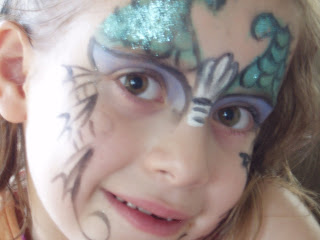 Email ThisBlogThis!Share to TwitterShare to FacebookShare to Pinterest
Labels: peanut allergy, the girl

Which reminds me. We were at a library event the other day, and I heard the librarian go over to a mom and say that another mom had baked nut-free cupcakes so that kids with nut allergies could have some. And I PANICKED, because I thought, "HOW can this mom of a child with nut allergies handle this?? She can't just GIVE HER CHILD THE CUPCAKE, assuming that this second-hand info is true! Who knows how educated the baker is about nut allergies??" It turned out that the cupcakes were baked by someone who had a child with severe nut allergies, so they were almost certainly fine---but I still thought it was a risk, and also that it seemed like someone who had a severely nut-allergic child would know not to put another parent of a severely nut-allergic child in a situation like that. I was remembering your post about bringing stuff from a package, and including the package so it can be evaluated by the parent.

Anyway. Her face-paint is WONDERFUL!

Ruth is going to FLIP OUT when i show her Harper's face paint! So cool. I bet she loved it.

And oh Kels. Gosh. Poor Harper. I can't even come close to imagining how terrifying that must have been for her. I am always in awe of the strength and grace that you & Harper both exhibit in dealing with peanut-related situations.

I think the clown needs to find another day job. Glad Harper is okay (and you too!)

This clown has apparently been living in the back end of one of the clown cars and not been out in society much, otherwise she would know what a stupid idea the peanut butter thing is. I would have been LIVID.

Another reason to think clowns are creepy.

One would think in this day and age, a clown act could come up with a none-nut food. Seriously, nut allergies are so common- why wouldn't they use another, less concerning food? Or even just water? Ridiculous! And because the severity of nut allergies varies, like you said, each family has their own way of handling it. Ugh! So awesome that Harper let you know right away (even though she was upset) and even better that she stayed to enjoy the rest of the party. Her facepaint is lovely :) Hugs to you for handling this with much more grace than I would have been able to muster.