Last week I was able to accompany Harper on a fall field trip to a local farm market. I was happy to go, but I also felt like I HAD to go because the woman there was so rude to me when I called to research the allergy safety of the trip. (That was one of the things that had me feeling so frustrated a couple of weeks ago.) How could a peanut allergy be dangerous at a farm market? This particular trip posed two difficulties. 1) The trip included cookies provided for the children. When I called I was told they were not safe for children with any kind of nut allergy. So no cookie for Harper, we'd bring our own treat from home, but all the other kids in her class would be eating the unsafe cookies. 2) There were animals at the farm market and it is not unheard of for peanut products to be used as filler in animal feed. (BTW peanut shells can also be present in things like top soil and fertilizer.) I hadn't been to this specific place before and called to ask questions about what the animals are fed. The woman I spoke with told me she couldn't possibly be expected to know. She did say the children weren't supposed to touch the animals, but she couldn't help it if they didn't follow the rules. Lovely.

ANYWAY. . . despite several potential pitfalls, the field trip ended up being perfectly safe and delightful for Harper. She especially loved riding the bus to and from the farm market. (I followed in my car.) It was her first bus ride. 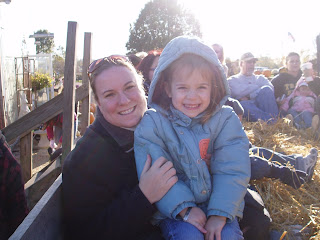 Other than the bus, the hay ride was the big hit of the trip. Unfortunately for me I am allergic to the hay. It was a l-o-n-g ride and every time one of the kids moved (three-, four-, and five-year-olds on hayrides don't sit very still!) all this hay-dust was kicked into the air. The children were thrilled, and I would have been too, had I not been acutely aware of the passages connecting my throat, ears, and nose before the ride had ended. Today was the first day I felt even remotely normal - I don't see many hay rides in our family's future.

Was it worth it for this smile? 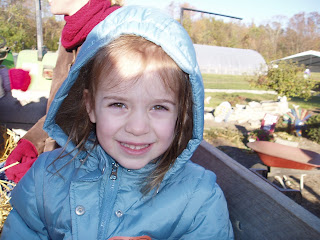 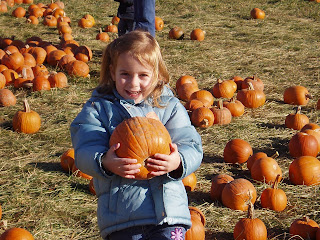 We had been to a different pumpkin patch last week as a family, but a racoon or some other animal took Michael's gourd off our front porch. Harper decided her pumpkin from the field trip could be for Michael. She's a good big sister. 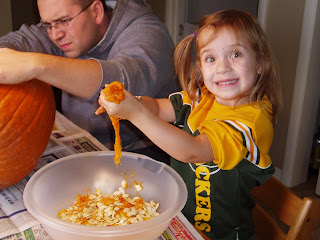 Matt and Harper enjoyed the annual gutting and carving of the pumpkins, while I happily stood aside to provide photographic support. 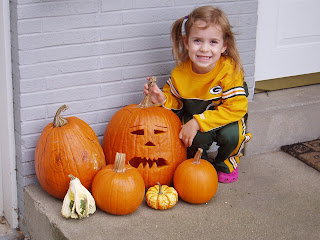 Michael, for his part, thinks he'll wait until next year to get revved up about Halloween. 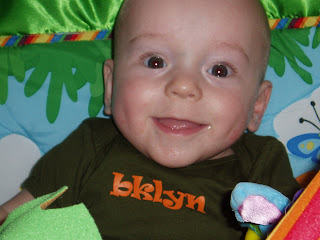 Anonymous said...
This comment has been removed by a blog administrator.
5:45 PM

I just wrote this whole big, long comment about how I feel for you, how I worry about germs like you must worry about peanuts, about the peanut rules at Kit and Jack's school and Archie's school, about how I can completely commiserate... and then my freakin' comment got deleted. I am so discouraged. But not discouraged enough to post another brief comment just to say, "Hang in there, Kelsey. You're doing a good job. And you make adorable babies."

My son is allergic to soy, peanuts, eggs, wheat and dairy, so I know how you feel. I started a website, www.spewdfree.com to help other people who have food allergies. I thought you might be interested.
Thanks,

I'm so glad to hear the field trip worked out okay. Sorry about the hay. I love that there is a photo of YOU and Harper in this post. Hi there! It's nice to see you!

Also, that Harper is so adorable and sweet. Oh, I miss you guys.

And the picture of Michael. It made my throat get tight. I was suddenly caught in a thought about how there was that scary time, 8 months ago, when we didn't know if he would be okay. Now LOOK at him. He is thriving. And SO HANDSOME.

Sheesh, that woman was a total bee-och! If someone called me and asked for information to make sure her kid didn't DIE on my farm, I'd sure as hell be as nice as possible! Some people are so defensive / concerned about being Top Dog that it's really obnoxious. I hope that she was just having an off day, because if she's like that all the time, damn.

Didn't she look totally thrilled in that picture?! What a sweetheart. And his grin just. kills. me. He is scrumptious!