One of the first major events of Harper's first year in preschool last year was the Valentine's Day celebration. I thought it would be fun to help her make cards instead of buying them. This is maybe not the best place to get all crafty because Valentines are cheap - less than $2 a box in many cases. But it bothers me that they all have characters all over them, and rarely is there enough space for a three- or four-year-old to actually write her name. Instead I invested in some glitter glue, stickers, a Valentine stamp, and a heart-shaped hole-punch.

I have no idea how last year's card-making went because, oops, I'd been hospitalized. There were, however, supplies aplenty left over, so we decided to give it a go this year. Harper may be up half the night making Valentines tomorrow, because she only go through half of them tonight. Next year I will attempt to spread out the card making a bit - it is not enough of a fun fest to get through all the cards in one sitting. And Harper had a difficult time understanding that she needed to sign her name, but not decide who each card was for. Her preschool teacher requested that the cards only say who they are from - then there is no need to fret about who gets what when they kiddos deliver them. 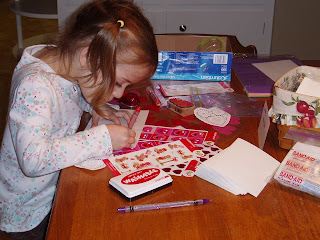 I also signed up to make treats for the party, so there will be at least one thing Harper can safely eat. The parents know not to bring peanut products into the room, but we don't let her eat things made in non-peanut-free homes, too risky.

First Harper helped me make rice krispie hearts, I spread some melted chocolate on them and Harper added sprinkles. I had pressed the batch of rice krispie treats onto wax paper on the counter and made them about 1/2 as thick as normal rice krispie treats. Cutting hearts out of the krispies was, as you'd imagine, a sticky mess. In the end it was still preferable to the work of doing cutout cookies, even if the results weren't so pretty. 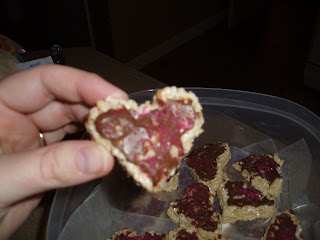 Today a note came home in Harper's bag requesting 3 dozen cookies, and I knew the rice krispie things wouldn't be enough. I ran for the trusty spritz recipe, since those cookies are so easy and can be done without embellishments in a pinch. I found a disc which I thought would produce a heart-shaped cookie, or something close to it. Instead I ended up with several dozen vaguely obscene cookies: 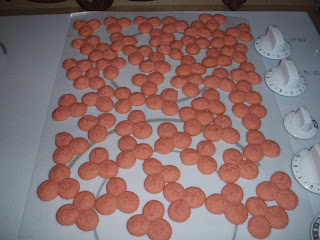 Please tell me the four-year-olds will see hearts. Or at least won't see cookies that ought to be rated R. They are pink. Oh wait. That isn't necessarily helpful.

*****
In other preschool news, Harper was attacked today! Okay, not really, but she was scratched by another child - in a manner that drew a tiny bit of blood. Because a tiny bit of blood was drawn the nurse called and left us a message and suggested we follow up with our pediatrician. I'll get to the pediatrician part in a moment, but can you please stop and imagine what went through my head when we returned home to an answering machine message from the school nurse?

When Harper isn't here and the phone rings I always, always, pray for a moment that it isn't someone calling to tell me she had an anaphlactic allergic reaction. It seems almost inevitable that one of those calls will come someday. (But some calm adult will have administered her epi pen and she'll be heading to the hospital for observation, just in case. See? No problem.)

Anyway I called the peds office and they said, as long as the scratches weren't deep, that we should wash them several times a day, keep them covered, and watch for signs of infection. So, you know, no big deal.

But wow, she's got three scratches on one hand, one on the other, two on her forehead, and two on her right cheek. There are scratches on her hands because she covered her face after the first scracthes, so her hands got in the way when the kid came back for more.

Harper swears she did nothing to provoke this, and I'm inclined to believe her. Little children are unpredictable and have poor impulse control, so things like this will probably happen from time to time. I know they are well supervised at school. There really isn't anything more to be done in this situation. I am sorry it happened though.
Posted by Kelsey at 10:42 PM

Way to go Harper! I am so impressed by the handmade valentines :)

and nice job with those krispies & cookies. I see valentine-y shamrocks :)

We made cards, too, and I had the foresight to start early...phew! It takes forever to sign those things. Those cookies are great, and I agree with MamaK, in that they are valentine-y shamrocks. The kids won't care in the least!

We did our cards tonight too. It involved Calum scibbling crayon all over them (no name signing) and Emmett alternating eating the cards, then eating the crayons. Lovely.

OH the preschool/ daycare injuries! We've had our share, to be sure. Bites (lots of those, actually), scratches, pushes. It stinks, and then one day YOUR kid does it, and it's SHOCKING.

It's wild to read the stories from last year. To say I'm "enjoying" the recounting doesn't sound right. But there's something reassuring to review all the details of what happened and already know the outcome is okay.

The part where you write about Harper's scratches seems like genius to me, because your tone is calm and measured and yet I FEEL IT and SEE IT in a way that is less calm.

I feel exactly the same as Erin about the stories from last year.